Politicians have ALWAYS looked for ways to cheat to get elected. Buying votes has been around since our country was founded. Compared to how the current politicians, those past cheater are pathetic amateurs.

It Was A Miricle!!

Not Really - It Was Election Fruad 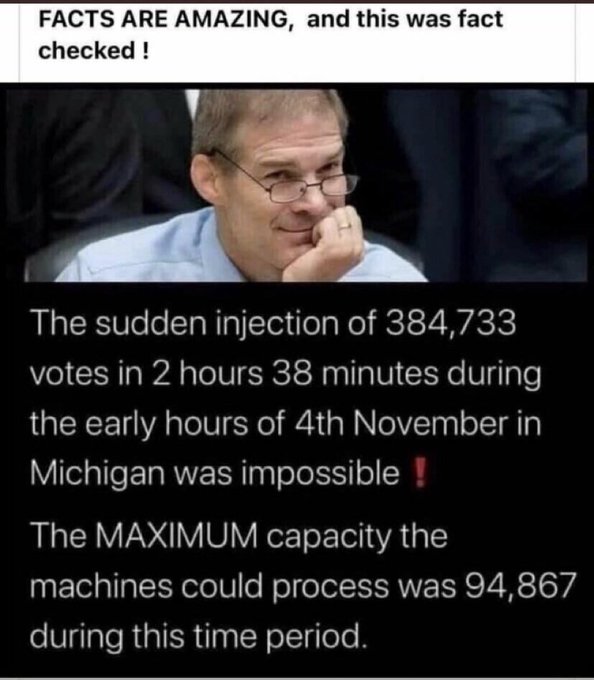 Then, surprise, surprise, when the counting resumed the next day, old Joe got 384,733 votes in 2 hours and 38 minutes.

That was a real surprise because the machine could only have processed 94,687 votes during that time.

Nothing could prepare me for the blatant theft before my eyes. As the days progressed, the facts bore the fraud out, yet the counting and fraud continued as it were just another election.

It is really simple. The government want full power over the people and they are making a move against the public.
The truth of the matter is that YOUR VOTE DOES NOT COUNT. Election integrity is our the window. The politicians in Washington DC are now in control of who wins elections. It's just like Stalin said. It does not matter who votes, but who counts the votes.

And the REAL problem is that neither part, Democrats or Republicans are doing anything about it. The only people who seem to care and are private citizens and groups that are exposing the widespread fraud in election. They do not have any legal standing and the only thing they are able ti do is inform the voting public how corrupt the voting system has become. It is up to YOU, the voting public to recognize these scumbags for what they are and pressure local officials to clean up their act.

Not Really - It Was Election Fruad

I have been watching elections since it has been on TV. Never was the voting STOPPED and then restarted the next day.

And the loosing candidates NEVER got 90%+ of the votes at the at the end counting. Pure Theft.

No other time in any election EVER was a candidate ever getting over 90% of the vote. And it happened in 6 state.

Even in Democrat strongholds the Republican candidate gets over 20% of the vote…and that is in a DEMOCRATIC district, not the entire state.

In this case the duck is voter fraud and the votes were counted by the thieves controlled by the Swamp Creatures in Washington DC.

Look carefully at the chart on the right. It tells the story. Joe was losing, ad then they stopped the count. When the count resumed, a miracle happens and he gets almost 100% of all the votes.

The election was stolen. Prove me wrong.